Index of Past Issues
Subscribe to Newsletter
Current Issue

The management ladder is not a steady climb. Some rungs require a longer step than others. Unfortunately, these longer steps can be too much of a stretch for some people. Their careers plateau, even though they have long been seen as high potential performers. 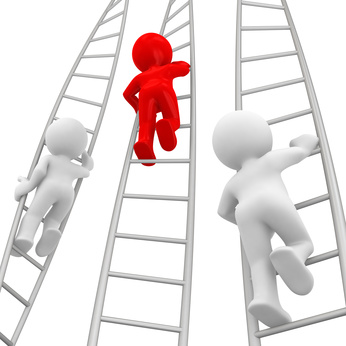 What causes such promising careers to level off prematurely? Why do some people handle the first rungs of the management ladder adroitly, only to reach a standstill part way up?

No one factor, of course, explains it. But after coaching over 600 executives and managers, I’ve noted one particularly common cause. It’s the failure to navigate one or more of five critical transitions.

The first transition is learning to think in progressively longer time frames. Most managers start off in positions where they supervise frontline operations. Their decisions are accordingly operational and short-term in nature. Relatively few of their decisions involve a time horizon more than a few days or weeks away.

At a slightly higher level (although still in lower management), the time horizon for planning and decisions shifts to quarterly and annual priorities. In middle management, this time horizon moves even farther into the future. Here managers routinely plan and implement initiatives which may require two or three years to complete.

Then, in upper management, planning and decisions are commonly associated with time horizons stretching out a decade or longer. I once coached a senior executive in the defense industry whose decision-making horizon was twenty to twenty-five years.

In general, the higher the level of management, the longer the time frames in which the manager must think. Yet, researchers have found that we all have a certain time frame to which we naturally gravitate when analyzing complex challenges. Large numbers of people are most naturally inclined to short-term thinking, others to long-term thinking.

For short-term thinkers, the challenge is to adapt to intermediate and long-range problem-solving in middle and upper management. They must retool themselves to think routinely in time frames outside their natural inclination.

The second transition is learning to feel comfortable making decisions in the face of ambiguity. As the time frame for planning grows longer, the data on which the plan is based becomes more ambiguous.

For entry-level managers, decision-making usually draws on concrete data. Because their decisions are largely near-term in nature, they have current, relevant data to rely on. Or if they lack this data, they can gather it easily enough. They also have an added benefit. If their decision is ever questioned, they can cite concrete data to defend it.

Once the time frame impacted by decisions grows longer, concrete data is less abundant. Ambiguity in the available data expands markedly. Decisions turn increasingly on trend lines and assumptions about those trends. When the time frame is years into the future, ambiguity may force managers to make decisions as much on intuition as on data or trends.

Many people who are decisive and confident making decisions backed by data prove to be uncertain, insecure, and hesitant when decisions require them to sort through ambiguity. Further, they may face a self-confidence crisis if challenged to defend the decision which they have made.

Given the pace of change today, management contends with ambiguity on an ever-increasing scale. Once on a flight I sat beside an entrepreneur who had built a number of nationally-recognized restaurant chains. I asked him to identify his greatest entrepreneurial challenge. Without a moment’s hesitation he said, “Finding managers who can maintain momentum in the fact of ambiguity.”

The third transition is from solving "thing" problems to solving "people" problems. Many fields such as engineering, research, IT, accounting, architecture, and construction attract workers who love to solve problems related to things, procedures, or processes. Solving "people-problems" may hold little interest for them.

Because of this disinterest, they may move into management with relatively undeveloped "people" skills. They simply have never seen the need for these skills or have never taken the time to develop them. The same can be said of new managers in dozens of other fields, too.

Yet, as they move up the managerial ladder, more and more of their challenges are people-centered. If they are not to derail their career, they must develop their interpersonal capabilities. They must learn to feel as much satisfaction from resolving people issues as they do from solving problems related to things.

Because lower levels of management focus on shorter-term decisions, they approach their duties primarily from a tactical perspective, not a strategic one. The higher people go in management, the more they must shift to a strategic mindset.

As compared to tactics, strategy operates with both longer time frames and a broader field of vision. It must take in the entire landscape and anticipate how that landscape will change over an extended period of time.

People who may be brilliant at tactics cannot always become primarily strategic in their outlook. They can’t seem to rid themselves of their tactical impulse. Thus, when they reach senior management positions, they are habitually more "hands-on" than they should be. As a result, they come to be seen as "not strategic enough" for the highest levels of management. And that limits future career advancement.

"Politics" traces back to the Greek term politeia, which referred to a city-state and its governance. In essence, "politics" is the art of running a community well. To do so, one must first understand both the formal and informal mechanisms which make the community work. Then, these mechanisms must be respected and skillfully utilized to get things done.

In higher management, this kind of political acumen is pivotally important in ways that it may not have been earlier in a career. That's because lower management decisions normally affect only people in the manager's immediate working circle. By the time managers reach upper level roles, however, their actions and decisions have potential ripple effects far beyond the manager’s purview.

The goal is to gain their support and to reduce the likelihood of pushback once the manager takes the planned action. The dialogue may also identify ramifications which the manager has not previously considered. This allows the manager to take these ramifications into account while finalizing plans for implementation.

Management literature stresses the importance of managers rallying their team around a new initiative. No less important is rallying other elements of the organization around it. Key management initiatives are commonly undermined, not by the manager's own people, but by people elsewhere in the organization who set out (consciously or unconsciously) to sabotage it. Politically astute managers move early and decisively to head off that threat.

Making each of these transitions successfully is no guarantee of career success. But failing to navigate them puts definite limits on a manager’s advancement. Fortunately, the skillsets required for these transitions can all be learned.

Moreover, it’s wise to start this learning process early in a management career. Today, more than ever before, talented workers can move up the management ladder rapidly. At a relatively early age, talented managers may find themselves in senior management positions. Preparation for these positions should therefore start sooner rather than later.