Index of Past Issues

In this issue I want to offer you a model for understanding change. My goal is to help you understand why change management is so challenging and why leaders fail so frequently at effecting change well. 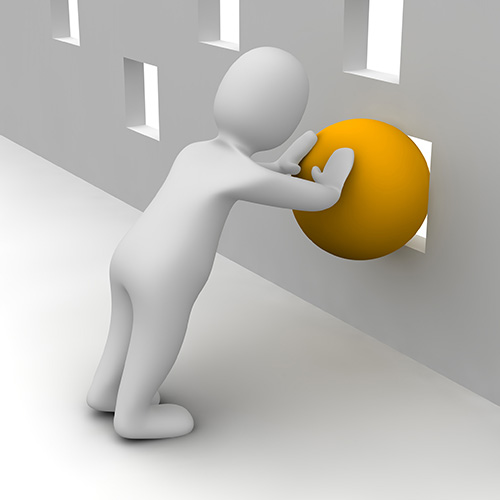 I use this model several times a month with my coaching clients. It gives them clarity on the range of issues which they must address whenever they are leading a change initiative.

The fundamentals of the model did not originate with me. They were first sketched in the 1980s by Richard Dilts, an early pioneer in neuro-linguistic programming (NLP). But I've significantly modified Dilts’ model, adding new dimensions to it and revising much of his terminology.

In its present form the model identifies eight levels at which all individuals and organizations can undergo change. The eight levels form a hierarchy. (I'll explain what I mean by "hierarchy" after I introduce you to the eight levels.)

We will start at the bottom of the hierarchy and build upward. At the lowest tier is the possibility of changing our Circumstances and Surroundings. If the situation in which we find ourselves is not promising or not promising enough, we may try to improve our lot by moving to a different setting.

Next in the hierarchy is Behavior. All efforts to effect change in either an organization or an individual aim at seeing a difference in behavior. Behavior is the place where change in the six levels above it makes itself evident. You'll see this more clearly once we introduce the remaining levels.

As we continue to move up the hierarchy we encounter the possibility of a change in Skills and Abilities, in Attitudes, in Beliefs and Convictions, in Values, and in Identity. Then at the very top of the hierarchy is a level for which I've not yet found a satisfactory name. The best I can do is to call it the potential for change in our Transcendent Connection.

That name sounds so ethereal that it seems out of place with the rather concrete, day-to-day terms used to label the other levels. But for now this name is the best I have to offer. What it connotes is that in order to be psychologically, emotionally, and socially healthy, we all need something bigger than ourselves — something larger than our identity — to which we feel a passionate connection.

Here then are the eight tiers in a top-down order:

In this structure, Values are the source of our motivation. They are either things in life that we desire so much that we strive to attain them. Or things that we don't want and which we strive to avoid. Some have defined values in this sense as "the things which we move toward and away from."

Beliefs and Convictions then state our rationale for prioritizing our values the way that we do. So one of your values may be honesty. If I ask you why honesty is important, you will respond with a statement which capsulizes some belief about honesty. "Honesty is the best policy." "My profession mandates a reputation for honesty." Or "If I'm always honest, I give people every reason to trust me."

Notice that Values (honesty, in this case) can be stated in a single word or at most in a very short phrase, such as "superb customer service." Beliefs and Convictions, on the other hand, can only be stated in a complete sentence or at least a complex clause. You can therefore tell whether a concept that shapes your outlook is a Value or a Belief by looking at its grammatical structure.

Now that we’ve clarified the meaning of critical terms, let’s look at the orchestrating principle in this hierarchy. To be specific, the higher the level at which change occurs, the more telling its effect on other levels — particularly the lower ones.

Or if we spend money training people to approach their jobs in a different way, but they have a belief that this approach is silly and a waste of time, the new Skills and Abilities will have little lasting effect on their Behavior. They may make a half-hearted try at the new approach. But because of their Beliefs and Convictions, they will constantly look for ways to minimize the effort which they put into the new approach.

This means that if we want to make change at any level, we must be sure that the levels above it are aligned to support that change. The reason that so many change initiatives go on the rocks is that managers try to change Attitudes, Skills, and Behavior without simultaneously being certain that the new Behavior they seek is in accord with the workers’ Identity, Values, and Beliefs.

The Challenge of Cultural Change

This hierarchy also explains why cultural change is such a daunting task, for culture is rooted heavily in Identity and Values. Yet I see one failed effort after another where leaders try to effect cultural change by working only at the level of Skills and Abilities. Or perhaps they throw in a little work on Attitudes. But inadequate attention, if any, is paid, to the higher levels of Identity, Values, and Beliefs and Convictions.

Wherever you are in leadership, you are regularly charged with effecting change in the organization. When you’re developing strategies to carry such endeavors forward, keep this hierarchy handy as a frequent reference. Take steps to assure that your strategy includes purposeful activity at all the relevant levels of change.

Your initiative may not involve a change of Identity. Most do not. But the majority of significant changes require us to examine Values, Beliefs and Convictions, Attitudes, and Skills and Abilities to be certain that they all align to support our targeted Behavioral change.

I've worked with this model now for nearly 20 years. And I'm still discovering new nuances in its implications. So don't give this model a mere once-over glance. Memorize it. Reflect on it. And use it to equip yourelf to be more effective at leading and managing change.