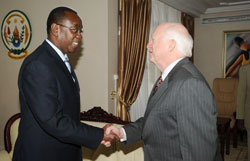 KIGALI, April 29, 2011 — Strategic Leadership Development International (SLDI), an organisation that provides comprehensive leadership development services across the world, will, by the end of this year, begin training programmes in the country

This was disclosed by Dr. Michael C. Armour, the president and founder of the organization, shortly after meeting with Prime Minister Bernard Makuza to discuss the implementation strategy.

"We have discussed with the Prime Minister when to begin the training and I am sure that if all goes well, we may start in August," he told reporters after the meeting.

Armour disclosed that the training would also be extended to other regional countries, adding that Rwanda and Kenya would be the first priorities.

He commended the country's leadership, saying that Rwanda needs to train more good leaders who will be able to consolidate what the country has achieved.

Protais Musoni, the Minister for Cabinet Affairs, commended Dr. Armour and pointed out that the consultants intend to meet various officials in the country, including local government, civil society organisations as well as entrepreneurs.

SLDI also intends to build its headquarters in the country.

Once the training programme starts, the beneficiaries would include university students, company chief executives, and government officials, among others.